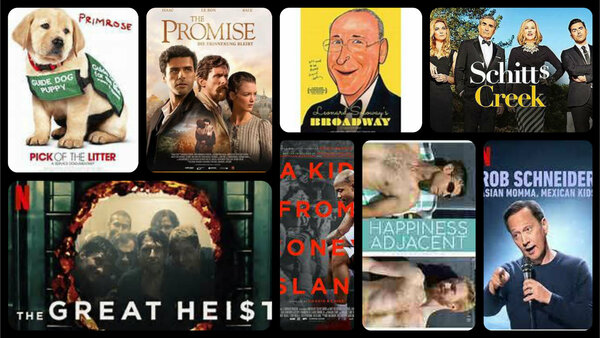 If I post this and you read it in enough time tonight at 7 PM on Playbill.com the Broadway production of "Newsies" and at 9 PM on PBS The Lincoln Center hit revival of "The King and I".


Notes" Season 5 of "Lucifer" starts tonight--see my review August 7--a MUST SEE show--detective story but very funny when the Devil is banished to Earth by his Father--meet his brothers, mother and here and there everyone else you know from hell--and his therapist, his female detective partner, etc.


1) "Pick of the Litter"--documentary--netflix--1 hour and 19 minutes--with a lot a awwwwww there is also a lot of education about how seeing eye dogs are trained--from the first, I picked 2 to pass all the tests and even though one didn't make it the dog became a great pet companion! MUST SEE!!


2) "Leonard Soloway's Broadway"--documentary--prime video--1 hour and 27 minutes--for those who know what goes on backstage and for those who always wanted to know what goes on backstage of the legit theatre this is excellent. Soloway produced and/or stage-managed and/or was general manager for over 100 Broadway shows this is a fun look not only of the business aspect of the theatre but, also, what it meant to be 'Jewish and Gay in the 'old days' and for those who were Jewish and Gay in the old days. Oh, yes, there is the 'gossip', tales out of school and many famous names involved in the tales or to tell them. MUST SEE!


3) "The Promise"--movie--netflix--2 hours and 12 minutes--based on the true story of the Armenian genocide in 1914 with a little "Hollywood" romance thrown in. Okay, but the 'romance' interferes with film.


4) "A Kid From Coney Island"--documentary--amazon prime video--1 hour and 29 minutes--a surprising and interesting story of a boy, Stepho Marbury, from the 'hood' who uses the love of basketball to get to the top and how he gets mistreated but takes his life back by going to another country.


6) "The Great Heist"--series--netflix--6 episodes--4 hours and 7 minutes--don't waste your time and go watch "The Money Heist"--based on the same true story but on so much better!


7) "Happiness Adjacent"--movie--amazon prime video--1 hour and 36 minutes--man and wife goes on a cruise--wife seasick from the minute she gets on the boat--husband meets a single gay man and has an affair with him--different and leaves a lot of questions opened, probably more so for a non-gay man watching it than a gay man who can fill in what happens after 'the end'. An interesting topic allowing for good conversation after.


8) "Schitt's Creek"--series--netflix--77 episodes--28 hours and 14 minutes--complete seasons available-- don't let the title turn you off--from beginning to end this is a warm, very funny show with an expert cast! MUST SEE!

I got to really like #8. At first I didn't like any of the characters (although the parents are wonderful actors), but I gave it some time and then loved it.
comment by drmaus on Aug 21, 2020 3:47 PM ()
It took about 2-3 episodes before I really got into it and I stayed for those 2-3 because I really like O'Hara and the others! The final episode was excellent all around!
reply by greatmartin on Aug 21, 2020 8:34 PM ()