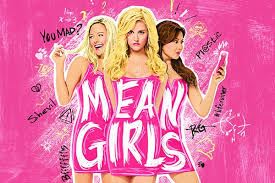 Never having seen the movie I did a little research before going to see "Mean Girls" plus have been playing the original Broadway cast album for the past 2 months. With a book by Tina Fey, who also wrote the movie, I just knew it would be funny. The music by Jeff Richmond and lyrics by Nell Benjamin sounded varied and up to Broadway standards.


A couple of things took me by surprise with the first being the energetic choreography and direction by Casey Nicholaw, the cast being up to what he asked of them plus the powerhouse voices of all but mainly the women.


All members of the cast from the stars to the ensemble work as a team and have a lot to do besides act, sing and dance. They are constantly in movement changing the sets on cue and not being distracted by the lighting and video design by Scott Pask, Finn Ross and Adam Young. The latter distracted me and took me out of the story a couple of times which made me admire the cast of 32 more than I would have otherwise!


It really wouldn't be fair to point out any of the main characters as all from Danielle Wade as Cady Heron, Adante Carter as Aaron Samuels, Mary Kate Morrissey as Janis, Eric Huffman as Damian and Mariah Rose Faith as Regina George along with Jonalyn Saxer as Karen along with Megan Maske Haley as Gretchen as her followers are commanding of their time on stage each holding their own whether in duets, solos or variations of groups. As an example of a show-stopping number, Eric Huffman and the ensemble open the second act with "Stop" that had the audience cheering and laughing. Ms. Norbury, played by Broadway vet Gael Gilliland, brought the house down in "Do This Thing" doing something the audience never expected!


All sing with significant power, which, unfortunately, the sound system often distorts the words of the songs making the words difficult to understand though each singer gets across what they are trying to convey whether it is the laughter or the anxiety of being a teenager. Also listening to the Broadway cast album helped a lot with understanding the lyrics.


Being of an older generation I don't' remember high school being as ruthless as what is presented here but then, maybe, I have forgotten the 'bad' stuff!


With Spring Break taking place "Mean Girls" is certainly a show worth seeing as many a college kid will see themselves on stage at the Broward Center of the Performing Arts where it is playing from now until March 15, 2020, and then continuing on tour.


"Mean Girls" runs 2 hours and 30 minutes including a 20 minute intermission.