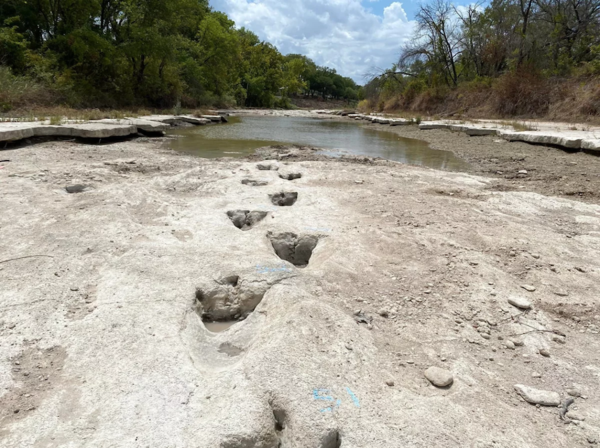 Those dinosaur tracks in the Texas riverbed, exposed by the drought and disappearing Paluxy River? My BIL the retired paleontologist identifies those as an Acrocanthosaurus. (He wrote a book on these.) Three toes, walks on 2 feet like a T Rex, tail held up. Ken still goes out on digs wherever he can, at present is investigating in Montana.

His wife, my youngest sister, is working for the National Parks system on mapping — I guess you could call it metamapping — the region. There is a more accurate word describing it, but I’ve forgotten it. In January she’ll move again, but they’ll probably go back to Utah where they’ll be close to Dinosaur National Monument. If I could tolerate such dry climates I might like living in places like this.

My work is not interesting, business is lousy, and so I'm investigating additional work. This is the longest summer I can remember in a long time, yucky and hot.

Maybe they will find that long time missing gangster!!!
comment by greatmartin on Aug 26, 2022 12:13 PM ()
Meanwhile, near Las Vegas: low water level in Lake Mead has so far revealed 4 or 5 sets of human remains. More to come.