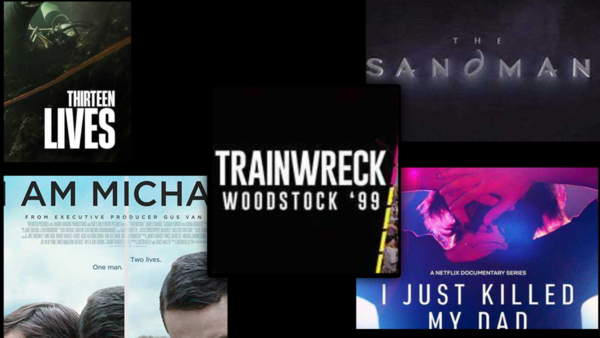 (Hate to admit it but the best new show I saw this week was on a network channel The CW--"Leonardo"--yes based on the life of Leonardo da Vinci!)


1) "13 Lives"--Prime--movie based on a true story--2 hours & 22 minutes--still being fresh in the mind and knowing how it ends really takes most of the suspense of the film about the young soccer players and their 25 year-old coach trapped in a cave underwater--director Ron Howard makes the stories of the boys and the divers who save them a good movie.


2) "The Sandman"--Netflix--series--season 1--10 episodes--6 hours & 4 minutes--the King of Dreams controls the dreams of everyone on earth and turns into a battle between the King and The Corinthian who uses nightmares to kill people--a lot of special effects but I was bored with the story and quit after the 5th episode!


3) "I Am Michael"--Prime--film based on a true story--1 hour & 41 minutes--Synopsis: Michael Glatze a 'former' gay magazine editor became a Christian pastor with a girlfriend--the acting by James Franco in the lead and the direction and screenplay by Justin Kelly are all flat and makes the story very unconvincing.


4) "I Just Killed My Dad"--Netflix--documentary--limited series--3 episodes--2 hours & 5 minutes--Synopsis: is Anthony Templet a murderer or a victim? That depends on who you ask and in the case of a teen who shot his own father there are no easy answers--found guilty or not what kind of life will he have?--there aren't many frills added to his story but really too much of a one note feel--one line remains with me--a test juror asks, "Guilty or not? But he did kill someone!"


5) "Trainwreck: Woodstock '99"--Netflix--documentary--3 episodes--2 hours & 23 minutes--Synopsis: an attempt to revisit the 'peace and love' of the original festival in 1969--the title says it all in that the documentary is like watching a train wreck and is a mess!

#5: it reminded me of working with Gen X members in the 1990s - they acted like us 'old folks' spent too much time planning and working through a process to make sure a given event or project would go smoothly - they said in the meetings that 'it'll be fine,' end of discussion. When it became a big mess, they said 'who knew this could happen?' but they didn't learn from it - they decided it was us old folks' fault because we 'let that happen.'
comment by traveltales on Aug 25, 2022 3:34 PM ()