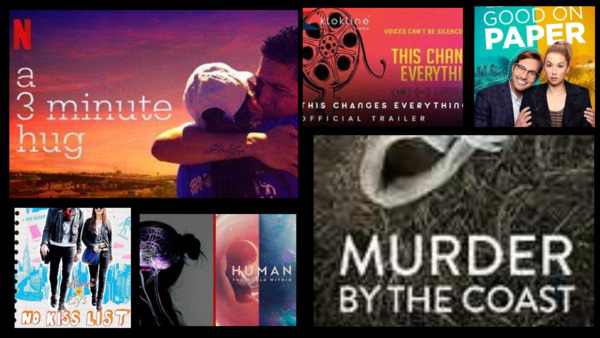 1) "A 3 Minute Hug"-- Netflix--Mexican Documentary--28 minutes--how would you feel seeing your spouse, child, parent, for only 3 minutes every 10 years? That is what this documentary is about--A MUST SEE!


2) "This Changes Everything"--Netflix--Documentary--1 hour & 37 minutes--as much as I thought I know/knew about the fight for equal rights I was surprised by a lot of what I heard here--this is NOT a Hollywood version of misogyny--I WAS VERY IMPRESSED BY GEENA DAVIS'S 2 YEAR STUDY AND NOW WANT TO READ IT!


4) "Naomi & Ely's No Kiss List"--Netflix--movie--1 hour and 30 minutes--a nongay woman and a gay male have been friends forever and, yes, they rate males--if you can sit through the first 1 hour & 23 minutes--ONLY LAST 7 MINUTES WERE ANY GOOD!


5) "Human: The World Within"--PBS & Netflix--Documentary--season 1--5 hours & 40 minutes--if you didn't know that our bodies work in weird, fabulous, unbelievable, sci-fi ways this will show you not only they do but you CAN CONTROL YOUR BODIES IN WAYS YOU DIDN'T KNOW


6) "Murder by the Coast"--Netflix--Spanish Documentary--in a limited series (see previous case I reviewed on July 18)--once again a wrong person accused and found guilty, in this case the lesbian lover of the victim's mother, in the media and therefore by a jury--INNOCENT SHE WAS SENTENCED TO 15 YEARS IN PRISON BEFORE SHE WAS RELEASED